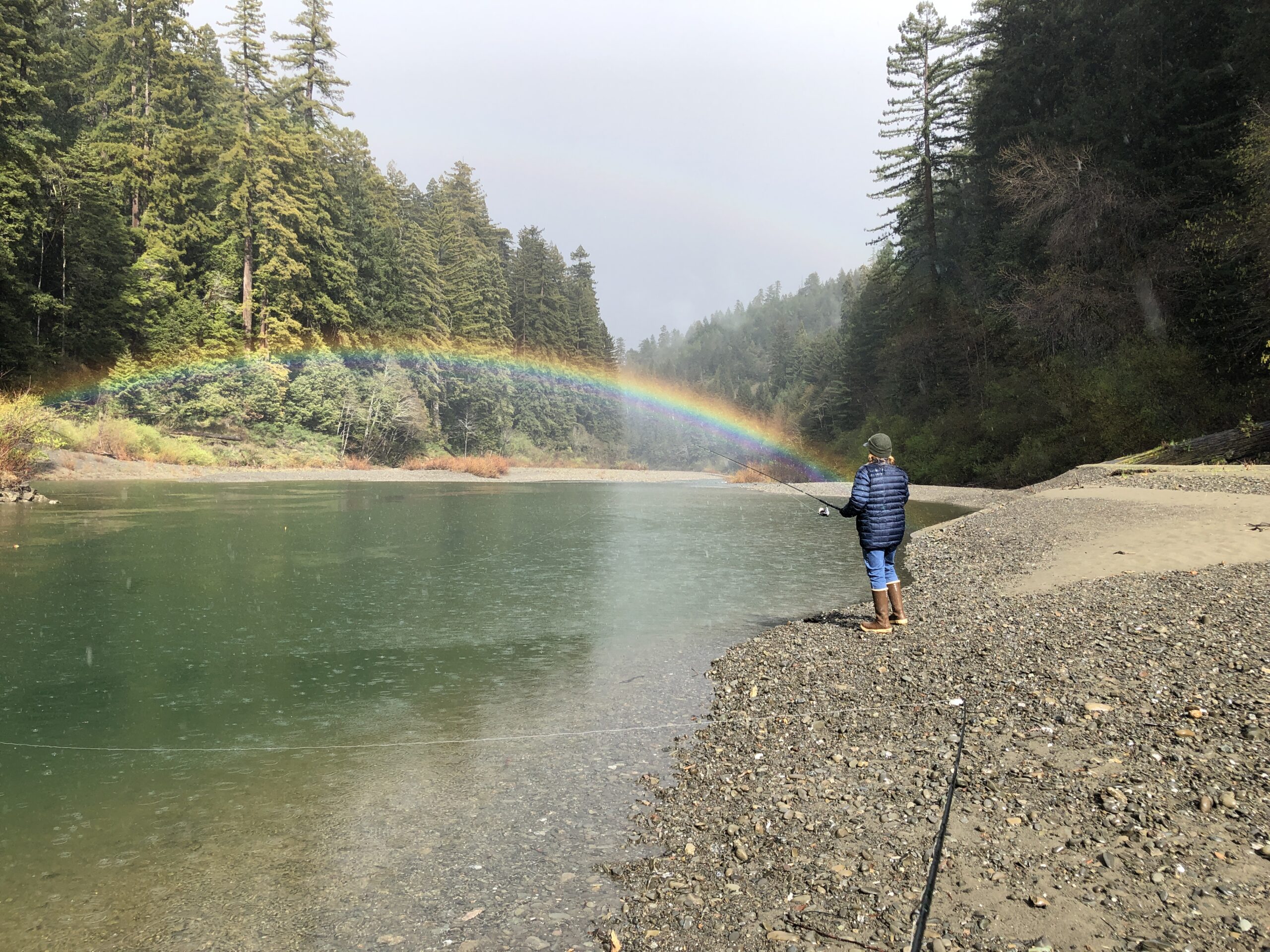 Eureka and Humboldt County have some of the best river fishing in northern California. When you're ready for world-class fishing with stunning scenery, grab your fishing pole and head out to these beautiful rivers to find your catch of the day.

Located in Humboldt County, the Mad River is located roughly 15 miles northeast of Eureka on Hwy. 299. It originates at Ruth Lake, about 95 miles to the southeast. Species of fish that inhabit the Mad include steelhead, king, and Coho salmon, along with resident trout. The Mad is known as one of the coast’s best winter steelhead rivers, mostly due to the Mad River Fish Hatchery. The hatchery is located about one mile southeast of the town of Blue Lake on the south side of the river. You can visit and see steelhead fry and smolts that will be introduced back into the river, Freshwater Lagoon, and Ruth Lake. Some of the best fishing is between the hatchery and the mouth. This area provides plenty of access for bank fishermen. Access for drift boats is limited. The area above the hatchery is mostly private property with very little public access.

The Eel River flows for approximately 196 miles beginning in Mendocino and running into the ocean near the town of Loleta 15 miles south of Eureka. The Eel flows through Humboldt Redwood State Park and some of the most beautiful redwood groves in the state. When the flows are right on the Eel, the water is a perfect shade of emerald green.

The Eel River is known for its winter steelhead run. The winter steelhead start moving into the river in November, running through March, with peak fishing during January. The average Eel steelhead runs 8-10 pounds, with fish up to 15 pounds not uncommon. The entire system — the Eel, the South fork of the Eel, and the Van Duzen River — provide excellent opportunities for winter steelhead. Chinook salmon start coming into the river in August and hold in the estuary until rains allow them upstream. The Chinook run from August through December, with the peak in late October. The average Eel chinooks are 8-15 pounds, with some up to 40 pounds and larger. The biggest challenge with the Eel River is when the area receives substantial rain, the river will turn muddy and won’t be fishable for days or possibly weeks. Check conditions before you go.

The Van Duzen is located 14 miles upstream from the mouth of the Eel and is one of the major tributaries of the Eel River. The watershed is roughly 50 miles and the best fishing is typically below the town of Bridgeville to its mouth. Winter steelhead are what the Van Duzen River is known for. The winter steelhead start moving into the river in December and run through March. The best fishing is usually in January.

The average steelhead runs 8-10 pounds, with fish up to 16 pounds common and a number of fish in the 20-pound class caught each year. The Chinook salmon run is from September through December, with October being the peak month. The average Chinooks are 8-15 pounds and can get up to 40 pounds or larger.

The Mattole River is located about 65 miles south of Eureka and 260 miles north of San Francisco in the Southwest corner of Humboldt County. The vast majority of its 62 miles is through southern Humboldt County, though a short section of the river flows through northern Mendocino County. The Mattole is one of the few undammed rivers on the North Coast with a population of wild steelhead with no hatchery influence.

The Mattole is primarily a steelhead stream due to its late opening on January 1. The river remains open through March 31 downstream to the confluence with Stansberry Creek and is open from January 1 through August 31 from Stansberry Creek upstream to Honeydew Creek. Fishing is allowed only with artificial lures with barbless hooks in the entire river and is closed to fishing year-round from the mouth to 200 yards upstream.

Redwood Creek is located approximately 45 miles north of Eureka on Highway. 101 near the town of Orick. The watershed has seen enormous logging pressure in the past and will turn muddy with very little rainfall. The key to fishing Redwood Creek is timing. You need to be there when the fish are and when the conditions cooperate. The main sport fish in Redwood Creek are winter steelhead, Chinook salmon, Coho salmon as well as sea-run cutthroat trout.

The Klamath River stretches over 200 miles and is the largest of the coastal rivers of California. It runs from the Oregon border and meets the ocean at the town of Requa. Requa is located 60 miles north of Eureka and 20 miles south of Crescent City off Hwy. 101. The Klamath is populated with king and Coho salmon, steelhead, and resident trout. Spring king salmon start running in July with the best action near the mouth. The Fall Chinook begin their migration upriver in August and will run through October. Summer/fall steelhead start running from late summer through October. The winter steelhead begin their run upstream in November and continue through March.

The average size of king salmon in the Klamath is 8 to 12 pounds, with the occasional 30-pounder caught.  The summer steelhead of the Klamath are smaller in size than the other rivers. The number of steelhead make up for this size difference, however. The Klamath is known for its "half pounder" run and is very popular with fly fishermen.

The Trinity River is well-known for its salmon and steelhead fishing by drift boat and bank angling. It’s also home to a trophy brown trout fishery that started in the 70s. King salmon are the most popular fish in the Trinity River. Spring-run salmon begin to enter the river in May and provide fishing through August. Fall-run salmon begin to enter the Trinity in August and will make their way upriver until they spawn in November and December. Winter steelhead will begin to show up in January and will run through March.

The Trinity, a major tributary of the Klamath River, begins in the Trinity Alps and makes its way through the wilderness before dumping into the Klamath River in the town of Weitchpec 70-mile northeast of Eureka. The Trinity is noted for its salmon and steelhead fishery resources, as well as its attraction to rafters, kayakers, and canoeists.

The Smith River, located in Del Norte County, is the furthest north of California's coastal rivers. The river lies 10 miles north of Crescent City and where the river meets the ocean is five miles from the Oregon border. The Smith is the largest free-flowing river in the state and offers some of the best winter steelhead and salmon fishing. The state record steelhead, 27 pounds 4oz, and the state’s second-largest Chinook Salmon, 86 pounds, were both caught on the Smith. Winter steelhead up to 20 pounds are common and the Chinook average between 20-35 pounds.

The Smith is known as the quickest clearing of all the coastal rivers. After large storms, the Smith can be fishable in a day or two. The free-flowing nature of the river has allowed it to carve its bed down to bedrock, which helps it to clear quickly.

The Chinook runs start in September and goes through December, with its peak around Thanksgiving. Steelhead runs start in early December and go through March. Peak season is in January. The Smith River flows through Six Rivers National Park as well as Jedediah State Park. The Rowdy Creek Fish Hatchery, which raises steelhead and king salmon, is in the town of Smith River near its mouth.

Before you head out, but sure to check current freshwater sport fishing regulations.

North Coast salmon/steelhead report cards: Anglers who are not required to have a sport fishing license, such as anglers who are under 16 years of age and anglers who will be fishing on Free Fishing Days, are required to have report cards to fish for salmon in the Klamath, Trinity, and Smith rivers and their tributaries; steelhead trout in all anadromous waters where take is authorized.

North Coast rivers that are regulated by low flow closures, including the Eel River, Mad River, Mattole River, Redwood Creek, Smith River, and Van Duzen River will begin angling restrictions on October 1st, except for the Mad River, which went into effect September 1st. The Department of Fish and Game will make the information available to the public by a telephone recorded message updated, as necessary, no later than 1 p.m. each Monday, Wednesday, and Friday as to whether any stream will be closed to fishing. The rivers can be opened up at any time. The low flow closure hotline for North Coast rivers is (707) 822-3164. *NOTE: The main stem Eel from the South Fork to Cape Horn Dam and the Mattole River will be closed until January 1, 2022

Eel River: The main stem of Eel River from the paved junction of Fulmor Road with the Eel River to the South Fork Eel River. Minimum flow: 350 cfs at the gauging station near Scotia.

Mattole River: The main stem of the Mattole River from the mouth to Honeydew Creek. Minimum flow: 320 cfs at the gauging station at Petrolia.

Redwood Creek: The main stem of Redwood Creek from the mouth to its confluence with Bond Creek. Minimum flow: 300 cfs at the gauging station near the Highway 101 bridge.